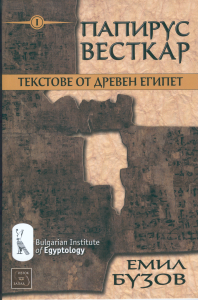 The book contains a philological study of one of the most popular Ancient Egyptian literature texts – the tales of papyrus Westcar. It has been known for more than 120 years when it was published by Adolf Erman. Since than the papyrus has been translated and studied by plenty of scholars.

The present book is the first attempt for translation in bulgarian language. It also presents a transliteration of the text and a detailed grammatical and philological study. All previous studies of the text were examined and taken into consideration.